Cervical disc replacement is a surgical procedure that involves removing a damaged or degenerated cervical disc and replacing it with an artificial disc device. Cervical discs are the cushions or shock absorbers between the bones (vertebra) of the neck (cervical spine). Discs that become damaged either through trauma or degeneration can be a source of pain. If part of a disc moves out of its normal position it can cause pressure on the central spinal cord or on the individual nerve roots that exit from the spinal canal at each vertebral level. Over time, the body’s reaction to a disrupted disc is the formation of bone spurs called osteophytes which can also cause pressure on the spinal cord or nerve roots. Disc disruption and degeneration can be a source of neck pain as well as cause neurologic symptoms which may include pain, numbness or weakness that radiates from the neck into one or both arms.

The standard initial treatment for symptomatic cervical disc disease typically involves physical therapy, medications, and occasionally spinal injection procedures. If the symptoms continue and are very bothersome for more than 6-12 weeks, surgical treatment can be considered. Some patients with a disc herniation that is localized off to one side of the spinal canal can be managed with a procedure performed on the back of the neck called a posterior discectomy or lamino-foraminotomy. However, the most common and traditional operation for symptomatic cervical disc disease involves an anterior cervical discectomy and fusion surgery.

With the anterior cervical discectomy and fusion technique, an incision is made in the front of the neck which allows the surgeon to remove the damaged and protruding disc and associated bone spurs in order to relieve any pressure on the spinal cord and nerve roots. After the disc is removed, the gap that has been created between the two bones is then typically filled with a piece of bone graft (obtained from a cadaver or from the patient’s pelvis) or with a synthetic (titanium or medical grade plastic) cage device. Once the pressure on the nerves has been relieved, the goal of the procedure is to cause the two bones to grow together (called a fusion) resulting in a complete loss of motion at the surgical level. In the anterior cervical discectomy and fusion procedure, a plate with screws is frequently applied to the front of the spine to provide initial stability which assists in achieving a solid fusion. Following the fusion, patients are often immobilized for up to six weeks in a cervical collar. X-rays are taken at different times after the surgery to determine whether the fusion has healed.

More recently, cervical disc replacement, also known as total disc arthroplasty, has become an FDA approved option for surgically treating symptomatic cervical disc disease. This procedure is similar to the anterior cervical discectomy and fusion except that the defect that is created by removing the disc from between the two vertebrae is filled with a disc replacement device. A disc replacement device is typically composed of two metallic surfaces one of which is attached to the upper and the other to the lower vertebra at the affected disc level. These metal implants can then slide on each other directly or can be separated by a piece of medical grade plastic. The device allows for motion between the two vertebrae to be maintained and avoids the need for a fusion. The disc replacement device can be secured in place with screws or it may have a press fit anchor that holds the implant to the bones (Figures 1 and 2).

Figure 1: This is a front to back x-ray (AP view) of the cervical spine showing a disc replacement device in place between the sixth and seventh cervical vertebrae. The space between the two solid portions of the device is filled with medical grade plastic. 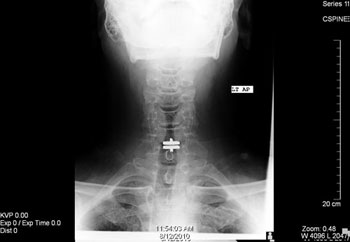 Figure 2: This is a side view x-ray (Lateral) of the cervical spine demonstrating a disc replacement device at the C6-7 level. The top and bottom components of the device sit at the level of the disc space with a keel that anchors each piece into the vertebral body above and below the disc space. 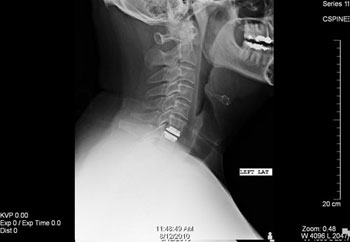 Cervical disc replacement does offer several practical and theoretical benefits over more traditional fusion surgery. Using a disc replacement device preserves motion at the affected level which may protect against accelerated degeneration of the discs above and below the disc replacement. While the goal of protecting of the adjacent disc levels is very important, it is not fully know exactly how much a fusion causes accelerated degeneration at the remaining discs. It should also be noted that the protective effect of a disc replacement on the remaining discs has not yet been definitively proven. Another potential benefit of disc replacement is that disc replacement surgery does not require any bone grafting. Additionally, since the bones are not being fused together, the possibility of a non-healed spinal fusion (called a non-union or pseudarthosis) is eliminated. Moreover, with disc arthroplasty there is no need for a plate to be placed on the front of the spine. Avoiding the need for a plate may potentially lessen irritation of the esophagus and reduce swallowing difficulty that sometimes occurs following anterior cervical surgery. Finally, with disc replacement surgery, cervical collar immobilization is typically decreased to a week or less, compared to the standard 4 to 6 weeks of immobilization usually prescribed after fusion surgery.

Who is a candidate for cervical disc replacement surgery and what are the risks?

Cervical disc replacement is used to treat symptomatic cervical disc disease that has failed to improve with nonsurgical care. While in most cases disc replacement (arthroplasty) can be used instead of an anterior cervical discectomy and fusion, there are situations where arthroplasty is not an option. Currently, in the United States, disc replacement is only approved for use at one cervical level and is not approved for use adjacent to a previous cervical fusion. The procedure should not be performed in children or when there is abnormal motion or instability at the affected level. Advanced degenerative changes known as spondylosis affecting the facet joints in the back of the spine at the affected level also precludes the use of a disc replacement device. A disc replacement device should also not be used in the presence of significant osteoporosis or an active infection. It is important to note that cervical arthroplasty is a newer and technically challenging procedure whose exact indications continue to evolve. Patients will need to see a qualified spine surgeon to discuss whether disc replacement is an option for their specific condition.

The risks associated with cervical disc replacement surgery are very similar to those associated with an anterior cervical discectomy and fusion. Nerve injury is extremely rare, but is a potentially catastrophic complication of this and most other spinal surgeries. Bleeding is usually very limited with cervical disc replacement and the risk of infection is also low. Swallowing difficulty is common with any anterior cervical surgery, but in most cases is self-limited. Technical difficulties related to placement of the disc replacement device including an incorrectly positioned implant or movement of the device following implantation is possible and could require revision surgery. Spontaneous fusion across the disc replacement level has been reported, but does not typically require treatment.

Many physicians and patients have expressed concern over whether the disc replacement device will wear out over time. Fortunately, unlike hip and knee replacements, this has not been found to be the case with cervical arthroplasty devices. This is likely because the stresses applied to these implants are significantly less than those seen in other joints such as the hip and knee. Additionally, the biologic environment of the disc space is quite different than that of the joints found in the extremities. Many other potential complications to the procedure do exist and a thorough discussion with your surgeon is mandatory before considering this or any other surgical procedure.

The procedure and recovery

Cervical disc replacement is performed with the patient under general anesthesia. Patients are positioned face up in the operating room and a one to two inch (3-5cm) horizontal incision is made on one side of the patient’s neck. The damaged disc is then exposed and removed. Magnification with a microscope or surgical loupe magnifying glasses is typically used to facilitate complete removal of the disc and decompression of the nerves. After preparing the disc space, the disc replacement device is sized and carefully placed into position between the vertebrae. Live x-ray called fluoroscopy is utilized to facilitate proper positioning of the disc replacement implant. The incision is then closed. Some surgeons may choose to place a drain into the wound and this is typically removed at the bedside on the day following the procedure.

Patients are typically discharged home the same day or the next morning following surgery. Immobilization in a cervical collar for up to a week may be required depending on your surgeon’s discretion. Pain from the procedure is usually limited and improves markedly within two to three days. Nerve symptoms such as pain, numbness, and weakness are often dramatically improved within hours of the surgery, but in some cases can take weeks or even months to recover. X-rays are obtained following surgery to confirm proper positioning and functioning of the disc replacement device. Most patients are capable of returning to light work within a week or two of surgery and to full duty six weeks following the procedure.