Ankylosing Spondylitis (AS) is a type of progressive arthritis that leads to chronic inflammation of the spine and sacroiliac (SI) joints. AS primarily affects the axial skeleton, including the ligaments and joints. Inflammation due to AS can also affect other joints and organs in the body, such as the eyes, lungs, kidneys, shoulders, knees, hips, heart, and ankles. AS is a true "systemic" disease, meaning the problem causes changes throughout the body.

One way to understand what AS does to the body is to look at the words "ankylosing" and "spondylitis." Ankylosing means stiffening. It comes from the Greek word "angkylos," which means bent. Spondylitis means inflammation of the spine. It comes from the Greek word "spondylos," which means spinal vertebrae. In essence, AS causes your spine to stiffen due to inflammation of the joints. This may cause the vertebrae to fuse together. It may also cause a kyphosis of the spine, which gives your spine a forward curve.

A healthy spine is able to move in many directions, which is why you can bend, turn, and twist. The spinal bones are joined together by flexible ligaments and are separated by cushiony discs, which allow a lot of movement. Movement can become impossible if the ligaments calcify and the bones fuse together. This is why AS can be disabling in its advanced stages.

Learn about AS including

In order to understand your symptoms and treatment options, it helps to begin with a basic understanding of spinal anatomy. This includes becoming familiar with the various parts that make up the spine and how these parts work together. Learn more about the anatomy of the spine.

Often the first sign of AS is inflammation of the sacroiliac (SI) joints. The SI joints are the two joints that connect the lower spine to the pelvis. You can feel these joints about two inches to either side of the spine in the low back. 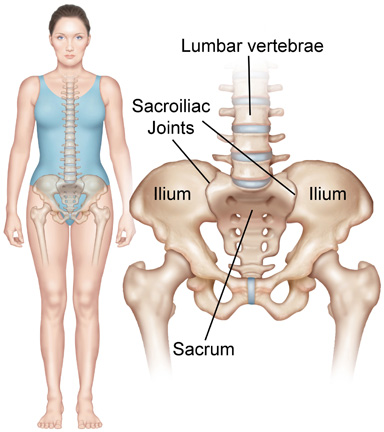 Inflammation eventually moves to the spine. Long-term inflammation of the spinal joints (called spondylitis) leads to calcium deposits forming in the ligaments around the invertebral discs (the cushions between your spinal vertebrae) and the ligaments that hold the vertebrae together. When these ligaments calcify movement is restricted. Eventually there can be a complete fusing together of the vertebrae (called ankylosis).

The origin of AS is still unknown. But much is known about how AS progresses and why it causes spinal stiffening. When AS first appears, an inflammation of the bones (called osteitis) occurs around the edges of the joints. In these areas, the number of special cells (called inflammatory cells) begins to increase. Inflammatory cells produce chemicals that damage the bone. This causes the bone to begin to dissolve and weaken around the edge of each joint.

Damage to the bone starts a process where the body continually tries to repair the damage with scar tissue and new bone tissue. As the process continues, the bone becomes weaker and weaker. When the inflammation finally "burns out" and begins to disappear, the body attempts to heal the bone by producing calcium deposits around the area of the damage. For some unclear reason, as the bone heals itself, the calcium deposits spread to the ligaments and discs between the vertebrae. This leads to a fusion of the spine, sometimes referred to as bony ankylosis.

AS primarily affects younger adult males. It is three times more common in males than females. Although AS can strike people of any age, race, or sex, the onset is most common in Caucasian men between the ages of 17 and 35. In women the symptoms of AS often begin to appear during pregnancy.

AS appears to be genetic. A specific gene-the HLA-B27 gene-is present in 80 to 90 percent of people who have the disease. This does not mean that if you have the gene you will automatically get AS. About eight percent of Americans have this gene but only about one percent of those will actually develop the disease.

Like other forms of arthritis, the symptoms of AS are from the effects of inflammation. Initially the symptoms may come and go for weeks or months at a time.

It is sometimes difficult in the early stages of AS to make a definite diagnosis. Your doctor will take a history and perform a physical exam. Other diagnostic tests include X-rays and lab tests. Your doctor may be alerted to the possible diagnosis of AS if your history includes

Your doctor may order X-rays of the spine and pelvis if AS is suspected. The vertebral bodies in a patient with AS are often seen on X-ray to be deformed and have a square shape. Doctors refer to this as a "bamboo spine" appearance-very symmetrical and segmented.

Most of the early X-ray findings will be seen around the SI joint, and they are usually seen on both sides. These signs include patchy osteoporosis (loss of bone mass), poorly defined joint margins, a widening of the SI joint space, and erosions of the joint. In advanced cases of AS, the X-rays will show many changes including calcium deposits in the ligaments and discs, complete spinal fusion, and sometimes old spinal fractures.

If your doctor suspects that you have AS, a blood test can be helpful in finding out whether you have the HLA-B27 gene. There is not a specific blood test available to determine if a person has AS. You may see AS referred to as a seronegative spondyloarthropathy. This refers to a patient who has all the symptoms of AS but does not have the positive blood test that usually indicates AS. (The negative test is called the rheumatoid factor.) This is simply a way for doctors to classify AS in relation to other forms of systemic arthritis. If you have the symptoms of AS and the HLA-B27 gene, AS is likely to be the correct diagnosis.

A blood test can show evidence of increased inflammation in the body. The test normally used for this is the Erythrocyte Sedimentation Rate (ESR). This is a simple gauge of inflammation in the blood from any cause. Even a common cold will increase this test significantly.

A urinalysis might be used to test the kidneys. This is done to look for possible kidney abnormalities that could be causing problems with similar AS symptoms.

There is no cure for AS yet, but there are effective treatments that can help relieve pain and improve the condition. AS is generally treated conservatively with medication, physical therapy, and exercise. Surgery may be necessary at some point to treat problems caused by AS in the spine and other joints of the body.

Your doctor will suggest medications to reduce inflammation and pain. The preferred way to treat AS, if they prove effective, is with NSAIDs, particularly indomethacin. It is best to take these medications as prescribed by your doctor. Possible side effects of NSAIDs include nausea, stomach upset, diarrhea, and abdominal pain. Taking them with food will help ward off side effects.

If NSAIDs are not sufficient, a medication called sulfasalazine may also be suggested. Corticosteroids, such as prednisone, are also very effective at reducing inflammation, but their side effects can be serious if taken on a long-term basis.

If anti-inflammatory medications do not control the pain and inflammation sufficiently, there are medications available that block the immune system in order to reduce inflammation. These medications have many side effects, so patients who take them must be closely monitored.

Learn more about medications used to treat back problems.

Your doctor may have you work with a physical therapist. A well-rounded rehabilitation program assists in calming pain and inflammation, improving your mobility and strength, and helping you do your daily activities with greater ease and ability.

Safe movement can improve spine mobility and posture. Physical therapy assists in pain control and prevention of deformities from AS. Patients are advised against prolonged sitting and best rest and encouraged to keep their spine straight, walk erect, and avoid stooping over for long periods. Therapy sessions may be scheduled two to three times each week for up to six weeks.

The goals of physical therapy are to help you

Surgical intervention is uncommon with AS. It is only necessary if the disease has led to severe deformity, such as extreme kyphosis, that prevents standing up and looking forward. In this case a spinal osteotomy might be considered. This operation involves cutting through the spinal bones and realigning them into a position that allows better upright posture. The spinal cord is never cut, only the vertebrae.

Surgery may also be recommended if the hip joints have been affected by the arthritis associated with AS. If the hips become severely damaged by arthritis, an artificial hip replacement may be required. Patients with AS commonly need this surgery.

More information on artificial hip replacement can be found at www.allaboutarthritis.com.